Four creatures and their mating rituals 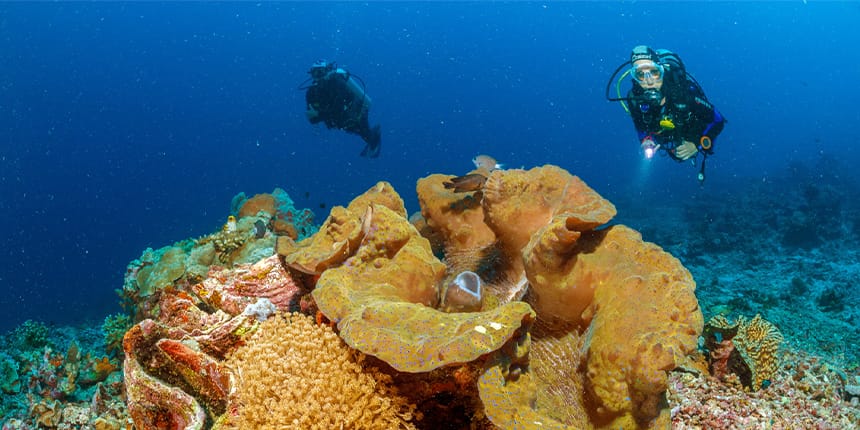 Today we’re highlighting four animals you can find in the waters around North Sulawesi. Specifically, we’re talking about how they mate. This article originally appeared over at Diveplanit and although it mentions the Great Barrier Reef, half of the animals listed there can be found in our area as well.

So that’s why we will focus on the following four:

The giant clam is the world’s largest species of mollusc. This animal – for yes it is an animal – comprises two hard shells which protect soft tissue inside which simply filters nutrients from seawater. It also gets some further nutrients from the bacteria living inside its tissue. Living to more than 100 years old, an adult giant clam can weigh around 200kg and stand almost a metre high.

So apart from the fact it looks like some kind of over-sized sexual organ, first question – are there boy clams and girl clams? Well, yes there are – but all clams start out as males. Like just about every living thing, the secret to survival is to grow quickly. Small clams, like small fish, put all their energy into growing. Only when they get to a certain size do they start to think (btw – a mollusc does not have a brain), about reproduction. But sperm requires much less effort to create than eggs. So small clams contribute the sperm.

Only when they grow past a certain size, and therefore age, do they ‘mature’ into females capable of producing eggs. In terms of the actual reproduction, with giant clams there’s definitely no argy-bargy, but something in the water that triggers ‘group sex’. On some kind of signal, all the clams in the area release their eggs or sperm – or whatever they’ve got handy – into the water to maximise the chances of fertilisation. The largest giant clams, Tridacna gigas, can release more than 500 million eggs in one go.

After fertilisation, the cells rapidly divide and grow to a small ball of cells the size of a mulberry, then to free swimming larvae that feed on plankton. After a few weeks they settle in one place and start the serious business of growing up.

Just a word of warning

The algae that provides extra nutrition to the clams requires sunlight, so most can be seen on shallow reefs (such as Fukui Point). Keep a look out for their bright blue-brown mantle when snorkeling. But beware, they close their shells very quickly if they feel something nearby. Approach carefully if you want to see them in their full glory.

Clownfish – or more correctly anemonefish – share a unique symbiotic relationship with sea anemones. They are immune to the sting in the anemone’s tentacles, which provides them with a safe haven from predators. In return for this safe haven, the clownfish help the anemone by attracting other fish and shrimp, which get stung and eaten by the anemone.

So how would you describe the sex life of a clownfish?  Let’s just say it’s complicated…

The female clownfish is always at the top of a clownfish colony hierarchy. When she dies, the most dominant male changes sex to replace her. This means of course, that Nemo’s dad, Marlin, should really have been his mum. Once the eggs, which are laid very close to, or even under the sea anemone, have been fertilised by the male, it is the male that is responsible for looking after them. Indeed, he spends up to 2 weeks fanning the eggs to help they develop.

Six of the world’s seven species of sea turtles are found in the waters around our Great Barrier Reef with the green turtle being the most common. It’s really quite strange that we find turtles so endearing, as they are actually just cold blooded reptiles: they breathe air, but live in water, and so have to come onto dry land to lay their eggs.

So when, where and mainly how do these armour plated reptiles get it on? Hands up anyone who has any idea? By some still little understood method, pregnant female turtles return to the beach where they first hatched to lay their own eggs. Obviously, male turtles have worked this out, and hang out around the beaches regularly use around mating season. But how do they all know when it’s mating season? Temperature!

The Maori Wrasse – also known as the Humphead Wrasse or even the Napoleon is the largest living member of the wrasse family. Easily identified by its large size, thick lips, and the hump that appears on the forehead of larger adults.

If you were hoping we’d left the juiciest fish-sex until last, I’m afraid you’ll be disappointed. Does this friendly guy look like he has a kinky sex life – I think not! The Humphead wrasses, like the Groupers, are protogynous hermaphrodites, (which means they have both sets of ‘tackle’ – though usually one set is predominant at any particular time), with some female members of a population becoming male at about 9 years old.

With Maori Wrasse preferring to live singly, and aggregations events being infrequent, often large males will approach and hang out with divers and snorkelers simply because they’ve become a bit bored of their own company.

When they do aggregate for the purposes of procreation, it’s the usual ‘spray and pray’ method employed by most fish.

Once we’ve consumed all the big fish, it will take a very long time for fish stocks to recover, and if we continue to catch smaller and small fish of the one species – they may never recover. Treat eating fish like a luxury, and eat sustainably caught and certified wherever you can.

I'm a PADI Advanced Open Water diver and the sight of sharks makes my life complete. I like to tinker with our website, a little bit of IT, and design work. My favorite Indonesian food is Mie Bakso. My favorite rap artist is MF DOOM and Kenny G makes my skin crawl.
Top
Menu
Menu
Menu
Menu